It recently occurred to me that I’ve referenced the Dragon Ball franchise in several blog articles. So I’ve taken the opportunity to gather everything into one spot, including information that I haven’t previously mentioned. This is meant to be a very basic introduction and not an exhaustive analysis. My current interest here is in modern adaptations of Journey to the West (Xiyouji, 西遊記, 1592). Those interested in a broader discussion on the influences of Dragon Ball should consult the work of Derek Padula.

The name of the series protagonist, Son Goku (孫悟空) (fig. 1), is a Japanese transliteration of Sun Wukong, meaning “Monkey Aware of Emptiness“, an allusion to Buddhist enlightenment. While referencing Rhesus macaques and “grandsons”, the surname Sun (孫), is also a veiled symbol for the development of an immortal spirit in Taoist elixir arts. Therefore, the name Son Goku straddles both Buddhism and Taoism.

Goku’s monkey tail, flying nimbus cloud, and extending power pole (fig. 2) are all based on the respective trait, skill, and weapon of the Monkey King. The latter’s skill is called the “Cloud Somersault (jindou yun, 筋斗雲), which can travel 108,000 li (33,554 mi / 54,000 km), or one and one-third the circumference of Earth, in a single leap. Sun’s staff, the “‘As-You-Will‘ Gold-Banded staff”, weighs a whopping 17,560 lbs (7,965 kg) and (among other abilities) can magically grow as big or shrink as small as the immortal desires.

Goku’s proficiency in boxing (fig. 3) has a fun connection to Sun Wukong. Series creator Akira Toriyama partly based the Saiyan’s fighting style on the Wing Chun techniques used by Bruce Lee and Jackie Chan in their respective films. This style falls under the umbrella term “Short Fist” (Duan quan, 短拳), a school of martial arts with a low stance and quick, compact punches. Journey to the West states that this very style is the Monkey King’s preferred fighting technique! He uses Short Fist a few times in the novel.

The spherical spaceship that baby Goku crash lands on Earth in from DBZ (fig. 4) is a clever nod to the magic stone that Sun Wukong is born from in the beginning of the novel.

Goku’s Ozaro (大猿) form, or his ability to change into a titanic “great ape” during a full moon (fig. 5), is largely based on the Monkey King’s cosmic transformation. The novel calls this magical skill the “Method of Modeling Heaven on Earth” (Fatian xiangdi, 法天像地), and Sun uses it to grow 100,000 feet (30,480 m) tall during battles with powerful opponents. This is related to ancient Pre-Qin and Han dynasty concepts of astral-geography later used in the construction of imperial Chinese cities.

While I don’t have confirmation from Toriyama, Goku’s “Instant Transmission” skill (fig. 6) might be based on the aforementioned cloud somersault. This is because Chinese Buddhist literature mentions the world of man is separated from the Buddha’s paradise by 108,000 li (the distance covered by the cloud), and the only way to instantly bypass all of the hardships in-between is achieving enlightenment. Hence the cloud somersault is symbolic of instant travel.

Goku’s early quest to find the dragon balls along with Bulma, the shape-shifting pig Oolong, and the desert bandit Yamcha is based on the “journey” of Journey to the West. The Monkey King, along with the pig spirit Zhu Bajie and the sand spirit Sha Wujing, guards a monk traveling to India to retrieve salvation-bestowing scriptures from the Buddha. Not surprisingly, other DB/DBZ characters come from the Chinese novel. The Ox-King and Chi-Chi are respectively based on the Bull Demon King and his wife, Princess Iron Fan (fig. 7). Tien Shinhan is based on Erlang, the only god to truly defeat Sun Wukong, which is why Tien is such a threat to young Goku.

Goku’s martial arts teacher, Master Roshi, is based on the Buddho-Taoist Sage Subodhi who teaches Sun Wukong magic and the secret of immortality. Subodhi is based on Subhuti, a historical disciple of the Buddha. This is hilarious when you think about how much of a pervert Roshi is (fig. 8).

The antagonist Broly (fig. 9) wears a shock collar and mind-controlling headband in various DB media. These are based on the Monkey King’s “Golden Fillet” (jing gu quan, 金箍圈), which represses his unruly nature by painfully constricting around his head when a magic spell is chanted. It’s interesting to note that this fillet is based on a historical ritual headband worn by ancient Indian Buddhist yogins as a physical reminder of self-restraint.

The senzu (仙豆, “immortal bean”) (fig. 10) used by Goku and other Z fighters to replenish their strength from prolonged training or battle are based on immortality-bestowing elixir pills that Sun Wukong eats while drunkenly stumbling through the laboratory of the Taoist high god Laozi. Once eaten, the pills immediately counteract the effects of the heavenly wine.

I recently remembered that I’ve also referenced the origin of the spikey hair in esoteric Buddhist art. On 02-14-2019 I posted on twitter saying: “Goku’s spiked hair is based on esoteric guardian deities. For ex., here is Tianpeng, the former incarnation of Oolong’s precursor Zhu Bajie [fig. 11].”

I first became interested in Journey to the West thanks to Dragon Ball Z. The series is obviously named after the seven glass-like orbs (fig. 12) created by the Namekian-turned-protector deity Kami for the benefit of mankind. When all seven are collected, they summon the dragon god Shenron, who grants a single wish. One common wish is to resurrect a beloved fighter who had previously been killed in battle.

But what would the Dragon Balls be like if they appeared in the Journey to the West universe? There are two possibilities. The first is the most obvious, the Cintāmaṇi (Sk: “wish-fulfilling jewel”; Ch: ruyi baozhu, 如意寶珠, lit: “as-you-will treasure jewel”). Also known as “dragon jewels” (longzhu, 龍珠), these luminous orbs are commonly held by Bodhisattvas in Buddhist art (fig. 13), thereby signifying their ability to grant any wish that a believer desires. They are also mentioned in Buddhist scripture. For instance, the Treatise of the Great Perfection of Wisdom (Sk: Mahāprajñāpāramitāśāstra; Ch: Da zhidu lun, 大智度論, c. 2nd-century) reveals that the Cintāmaṇi is a bodily relic found in the brains of dragon kings (longzhu chu longnao zhong, 龍珠出龍腦中) (Buswell & Lopez, 2014, p. 193). Therefore, we would be able to maintain the connection to dragons in Journey to the West.

(If we view Dragon Ball Z under the light of this new information, a creepy implication is that Kami killed seven dragon kings in order to create his set of dragon balls.)

In East Asia, the Cintāmaṇi is closely associated with our second possibility, the Śarīra (Sk: “body”; Ch: Sushe/zi, 舍利/子) (fig. 14). These pearl-like beads figure among the bodily relics left over from the historical Buddha’s cremation. [1] Strong (2004) explains: “[They are the result] of a process of metamorphosis brought on not only by the fire of cremation but also by the perfections of the saint (in this case the Buddha) whose body they re-present” (p. 12).

They are said to come in different colors and sizes depending on the country and religious tradition (Strong, 2004, p. 11). 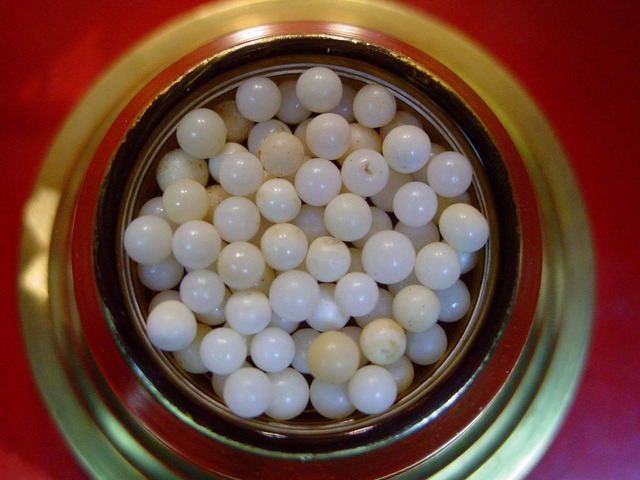 Journey to the West could have one or even both of these bodily relics. For example, the Cintāmaṇi would allow demon kings or lesser spirits to wish for powerful heavenly weapons, thereby helping them fight stronger opponents; or, the Śarīra could grant the devils more spiritual power, thereby allowing them to bypass centuries of spiritual cultivation.

But neither of these items could help evil beings achieve immortality. I’ve previously noted that Journey to the West was heavily influenced by the Buddho-Daoist philosophy of the Southern Quanzhen School Patriarch Zhang Boduan (張伯端, mid to late-980s-1082). He believed that in order to become a true transcendent (xian, 仙), one had to achieve both the Daoist elixir of immortality and Buddha-nature (Shao, 1997; 2006). The first extends your life, while the second frees you from the endless rounds of rebirth. While the aforementioned spiritual objects may grant them divine longevity, it won’t make them unkillable. And if they are killed, they would still be subject to the wheel of reincarnation. It would be up to them to achieve the last step in this two-step process. But that would require these spirits to mend their evil ways and “return to the right path” (gui zheng, 歸正)⁠—i.e. convert to Buddhism.

It turns out that Journey to the West has śarīra beads. In fact, they are mentioned at least 18 times throughout the novel. One example is a treasure belonging to the Yellow-Robed Demon (Huangpao guai, 黃袍怪). Chapter 31 reads:

Leading Pilgrim [Sun Wukong], the fiend [Yellow Robe] took his companion into the murky depth of the cave before spitting out from his mouth a treasure having the size of a chicken egg. It was a śarīra [shelizi, 舍利子] of exquisite internal elixir. Secretly delighted, Pilgrim said to himself, “Marvelous thing! It’s unknown how many sedentary exercises had been performed, how many years of trials and sufferings had elapsed, how many times the union of male and female forces had taken place before this śarīra of internal elixir was formed. What great affinity it has today that it should encounter old Monkey!” (Wu & Yu, 2012, vol. 2, pp. 80-81). [2]

As can be seen, Yellow Robe’s śarīra is portrayed as the hard-won product of spiritual cultivation. This agrees with Strong’s (2004) statement above that Buddhists believed such beads were “brought on not only by the fire of cremation but also by the perfections of the saint (emphasis added) … whose body they re-present” (p. 12).

One thought on “Dragon Ball and Journey to the West”