The Monkey King’s quest for immortality spans some ten years, taking him passed two cosmic continents and two great oceans. After sailing to a continent in the west, our hero is directed to the abode of the Sage Subhuti, a place often translated as “The Mountain of Mind and Heart / Cave of the Slanted Moon and Three Stars” (Lingtai fangcun shan, xieyue sanxing dong, 靈台方寸山，斜月三星洞) (fig. 1) (Wu & Yu, 2012, p. 113, for example). This translation, however, glosses over deeper meanings associated with the original Chinese. The term lingtai (靈臺/台), literally “spirit platform/tower” or “numinous platform/tower”, was sometimes used in Daoist literature to refer to the “heart” or “mind” (xin, 心, “heart-mind” hereafter), the center of spiritual intellect. Going back centuries to the Zhuangzi (c. 3rd-century BCE), it was represented as something that had to be guarded against malevolent influences:

Utilize the bounty of things and let them nourish your body; withdraw into thoughtlessness and in this way give life to your mind; be reverent of what is within and extend this same reverence to others. If you do these things and yet are visited by ten thousand evils, then all are Heaven-sent and not the work of man. They should not be enough to destroy your composure; they must not be allowed to enter the Spirit Tower. The Spirit Tower has its guardian, but unless it understands who its guardian is, it cannot be guarded (Chuang & Watson, 1968, p. 194).

Fig. 1 – Monkey kneeling before the entrance of Subhuti’s school asking to become a disciple (larger version). A detail from Mr. Li Zhuowu’s Literary Criticism of Journey to the West (late 16th-century).

The term fangcun (方寸), literally “square inch”, was also used historically to refer to the heart-mind. [1] But it’s important to note that Daoist alchemical literature sometimes uses the term to refer to the lowest cinnabar or elixir field located approximately “two inches below the navel, three inches within, where the mind is focused” (Saso, 1995, p. 128). For instance, the Scripture of the Yellow Court (Huangting jing, 黃庭經, c. 4th-century), a treatise associated with the Highest Clarity tradition, recognizes three fields: brain (upper), heart (center), and belly (lower) (fig. 2), each one represented by a series of place names or an anthropomorphic persona (Saso, 1995, pp. 106-107). The scripture presents the lower field/square inch as the storehouse of vital spiritual energies, the synergy of which is thought to bolster the body and bring about immortality. A portion of the fifth stanza reads: “Inside the square inch, carefully cover and store qi. / Shen spirit and jing intuition returned there, though old, are made new / Through the dark palace make them flow, down to the lower realm. / Nourish your jade tree, now a youth again”. [2]

The scripture treats the central heart-mind field as the seat of the spirit (shen, 神), sometimes anthropomorphizing it as a red-robed man (Saso, 1995, p. 125, for example). But it also calls the field the spirit platform. A section of the sixth stanza reads: “The spirit platform meets heaven in the central field. / From square inch center, down to the [dark] gate, / The soul’s doorway to the Jade Chamber’s core is there”. [3] Saso (1995) explains the first line refers to the interaction between the heart-mind and the Dao, with the second and third referring to spiritual energies being directed into the lower field via a passage near the kidneys (p. 129). Despite the cryptic Daoist jargon, what’s important here is the link between the center field/spirit platform and the lower field/square inch. 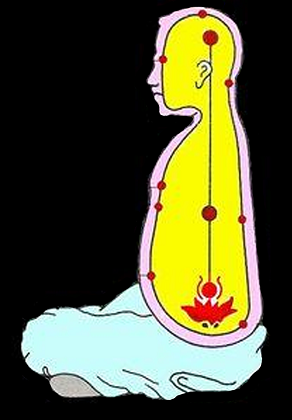 I propose the name of Subhuti’s mountain home was specifically chosen by the author-compiler of the Journey to the West as a metaphor for the alchemical practices taught in the Scripture of the Yellow Court. This conclusion is supported by the mention of the scripture in the very first chapter of the novel. This happens when Monkey confuses a lowly woodcutter for an immortal just because the man was singing a Daoist song, one taught to him by Subhuti:

The Monkey King explained, “When I came just now to the forest’s edge, I heard you singing, ‘Those I meet, if not immortals, would be Daoists, seated quietly to expound the Yellow Court.’ The Yellow Court contains the perfected words of the Way and Virtue. What can you be but an immortal?” (Wu & Yu, 2012, p. 111)

I find it interesting that Wukong touts the authority of the Scripture of the Yellow Court even before having begun his Daoist training. From where did he learn this? Could this be projection of the author-compiler?

Another aspect of Subhuti’s location that requires explanation is the cavern housing his temple, the “Cave of the Slanted Moon and Three Stars” (xieyue sanxing dong, 斜月三星洞). The name is a literal description of the Chinese character for heart-mind (xin, 心). It looks just like a crescent moon surmounted by three stars (fig. 3). This means all three sections of the location name (spirit platform, square inch, cave name) are associated in some form with the heart-mind. The reason for this could be because Sun Wukong is an embodiment of the “Mind Monkey” (xinyuan, 心猿), a Buddho-Daoist concept denoting the disquieted thoughts that keep man trapped in Samsara. Examples include the titles for chapters seven (“From the Eight Trigrams Brazier the Great Sage escapes; / Beneath the Five Phases Mountain, Mind Monkey is still”) and fourteen (“Mind Monkey returns to the Right; / The Six Robbers vanish from sight”). Additionally, a poem in chapter seven reads: “An ape’s body of Dao weds the human mind. / Mind is a monkey—this meaning’s profound” (yuanhou dao ti renxin / xin ji yuanhou yisi shen, 猿猴道體配人心 / 心即猿猴意思深) (Wu & Yu, 2012, p. 190). Anthony Yu suggests this poem is related to the Buddha’s statement that Wukong is “only a monkey who happened to become a spirit, … merely a beast who has just attained human form in this incarnation” (Wu & Yu, 2012, p. 70), thereby alluding to a Confucian hierarchical scale present in the novel where animals are able to attain human qualities through Daoist cultivation. So Monkey’s Daoist training under Subhuti allows him to wed his monkey form to the human heart-mind.

1) In Buddhism, for example, the fourth Chan patriarch Daoxin is quoted as saying: “All schools of the Law find their way to the Square Inch; all rivers and sand of wonderful virtues come from the Source of the Mind (xinyuan 心源)” (Liu, 1994, p. 28).

2) See Saso, 1995, p. 127 for the full stanza and explanation. I have changed all quotes used from this source from Wade-Giles to Pinyin. I also slightly modified the translation.

Liu, X. (1994). The odyssey of the Buddhist mind: The allegory of the later journey to the West. Lanham, Md: Univ. Press of America.