Did you know Sun Wukong was named after a historical Tang Dynasty monk? Originally a Chinese diplomat of Tuoba origin, Che Fengchao (車奉朝, 731-812) was part of a royal mission sent to Kashmir in 751. Che was too sick to return with them in 753, so he stayed in country and was eventually ordained as a Buddhist monk with the religious name Fajie (法界), or “Dharma Realm”. He lived abroad for several decades before returning to China in 790. There, he presented Emperor Dezong with various translated Sutras and a Buddha relic in the form of a tooth. The emperor was so pleased that he renamed the monk Wukong (悟空), or “Awakened to Emptiness” (Wang, 2006, p. 66). 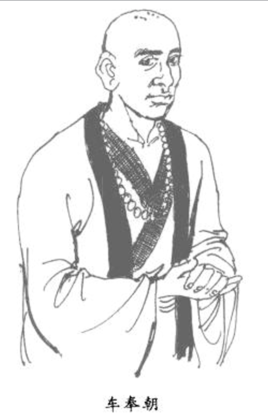 A modern depiction of Che Fengchao, the monk known as Wukong.

It’s interesting to note that the name Sun Wukong does not appear in The Story of Tang Tripitaka Procuring the Scriptures, the 13th-century precursor of JTTW. Instead, the novelette refers to him simply as the “Monkey Pilgrim” (hou xingzhe, 猴行者) (Wivell, 1994, p. 1182). Therefore, the name Sun Wukong was most likely chosen by the compiler/author of the version we know and love today.

See also: Monkey’s Surname and its Connection to Daoist Doctrine

Wivell, C.S. (1994). The story of how the monk Tripitaka of the great country of T’ang brought back the Sūtras. In Mair, Victor H. The Columbia anthology of traditional Chinese literature (pp 1181-1207). New York: Columbia University Press.

Chapter one of Journey to the West describes Sun Wukong‘s birth from stone (fig. 1).

There was on top of that very mountain [Flower Fruit Mountain] an immortal stone, which measured [36 feet 5 inches (11.09 m) in height and 24 feet (7.31 m) in circumference]. Though it lacked the shade of trees on all sides, it was set off by epidendrums on the left and right. Since the creation of the world, it had been nourished for a long period by the seeds of Heaven and Earth and by the essences of the sun and the moon, until, quickened by divine inspiration, it became pregnant with a divine embryo [xian bao, 仙胞]. One day, it split open, giving birth to a stone egg [shi luan, 石卵] about the size of a playing ball [yuan qiu, 圓毬]. Exposed to the wind, it was transformed into a stone monkey endowed with fully developed features and limbs (Wu & Yu, 2012, p. 101).

So why was Monkey born from a stone? Ancient Chinese fertility cults placed stones on altars dedicated to creation goddesses because the earth element symbolized the fertile, creative forces of nature. For example, one such goddess, Nuwa (女媧), is said to have fashioned mankind from mud and mended the heavens with five magic stones. A few such fertility cults are also associated with Yu the Great (大禹), a legendary sage emperor of the Xia Dynasty, via his marriage to Nuwa (in some traditions), and it is this connection that culminated in stories from the Han Dynasty claiming that Yu was born from a stone. An ancient tale said to be from the Huainanzi (淮南子, c. 139) states the same happened to his son:

Yu went to appease the floods. He pierced through Huanyuan Mountain, and transformed himself into a bear. [Earlier] Yu had said to Tushan [土山, his wife], ‘At the sound of the drum, you would bring me food.’ Yu jumped on a piece of rock, and thus hit the drum by mistake. Tushan [brought the food and] went. She saw the transformed bear. Feeling embarrassed and distressed, she went away as far as the foot of Songgao Mount where she was transformed into a stone. Yu said to her, ‘Return my son.’ Facing north, the stone split open and gave birth to Qi [啓, fig. 2] (Wang, 2000, p. 54). [1]

Fig. 2 – A woodblock print of Emperor Qi of Xia from a Ming-era version of the Shanhai jing (larger version). Plate XLIV from Strassberg, 2002, p. 168.

What I find interesting about this is that Yu and his son Qi went on to become great heroes and rulers after their births from stone. This parallels Monkey’s birth, enthronement, and later adventures. In a way, this makes Monkey a sort of literary spiritual successor to Yu. The compiler-author of JTTW may have wanted to literally cast Wukong from the same mold as the flood conqueror by giving him a similar origin. This then would explain why Monkey comes to wield Yu’s cosmic ruler, the gold-banded cudgel, the means by which the future Xia emperor put the world into order, as a weapon.

Sun Wukong wishes you a Happy Mother’s Day! Photomanipulation by me.

I have drastically expanded this piece to write a new article. I discuss other figures from world myth who are born from stone and later rebel against heaven just like Wukong. All future updates will be made there:

1) I have changed the Wade-Giles to Pinyin.

Wang, J. (2000). The story of stone: Intertextuality, ancient Chinese stone lore, and the stone symbolism in Dream of the red chamber, Water margin and the journey to the West. Durham [u.a.: Duke Univ. Press.