Sun Wukong first appears as the “Monkey Pilgrim” (Hou xingzhe, 猴行者), in The Story of How Tripitaka of the Great Tang Procures the Scriptures (Da Tang Sanzang qujing shihua, 大唐三藏取經詩話, late 13th-century) (The Story, hereafter), the earliest known printed version of the Journey to the West story cycle. He is described as an immortal punished by heaven for stealing peaches from the Queen Mother of the West, and after being banished to earth, he becomes the ruler of the 84,000 monkeys of Flower Fruit Mountain. He enters the story as a white-clad scholar and a willing participant in the journey who actively seeks out the monk Tripitaka and his retinue of travel companions on their quest to India. The Monkey Pilgrim then uses his magical abilities, aided by treasures from heaven, to protect the monks from all manner of demons, wizards, and dragons. In the end, he is bestowed the title “Great Sage Bronze Muscles and Iron Bones” (Gangjin tiegu dasheng, 鋼筋鐵骨大聖) (Wivell, 1994).

The Monkey Pilgrim’s heavenly treasures are based on those used by the famed Buddhist saint and hero Mulian (目連; Sk: Maudgalyayana), a disciple of the Buddha, who appears in a late 9th to early 10th-century Bianwen (變文) text in which he travels to the underworld to release his mother from karmic torment (fig. 1). Originally discovered in the oasis of Dunhuang, the text serves as the foundation for the Ghost Festival, which is held on the fifteenth day of the seventh lunar month. In this article, I will discuss the treasures of both Mulian and the Monkey Pilgrim, as well as the saint’s influences on Sun Wukong from the Ming Journey to the West. 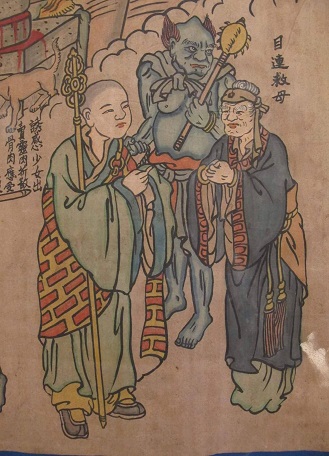 Sun Wukong’s signature magic staff is an amalgam of two weapons used by the Monkey Pilgrim, the first being a golden-ringed monk’s staff (fig. 2) and the second an iron staff. The former is capable of shooting destruction rays of light and changing into living beings, including a giant, club-wielding yaksha and an iron dragon (Wivell, 1994, pp. 1188, 1189, and 1190), while the latter is capable of beating nine-headed serpents into submission (Wivell, 1994, p. 1190). Elements of each were eventually combined in the following centuries; the golden rings from the monk’s staff were transposed to the ends of the iron staff, creating a weapon capable of growing, shrinking, and multiplying according to the user’s wishes. 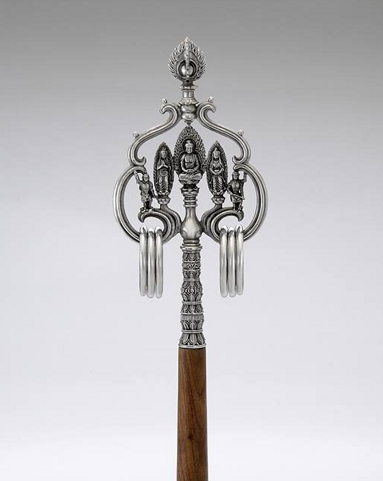 The Monkey Pilgrim receives the golden-ringed monk’s staff, an alms bowl, and a cap of invisibility from the supreme deity Vaisravana, the Mahabrahma devaraja, to aid in his protection of Tripitaka. The staff and alms bowl were historically two of the eighteen requirements (Ch: suoyi, 所依; Sk: nisraya) of a Buddhist monk, and both were often carried by itinerant monks preaching and begging on the road (Robert & David, 2013, p. 432). The Monkey Pilgrim’s staff is based on that carried by Mulian. Here is the section of The Story in which Monkey receives his holy treasures from heaven:

Now compare that with this section of Mulian’s tale in which he receives the staff from the Buddha:

“How will I be able to see my dear mother again?”
The World-Honored called out to him, saying, “Mahamaudgalyayana!
Do not be so mournful that you cry yourself heartbroken;
The sins of the world are tied to those who commit them like a string,
They are not stuck on clay-fashion by anyone else.
Quickly I take my metal-ringed staff and give it to you.
It can repel the eight difficulties and the three disasters.
If only you remember diligently to recite my name,
The hells will certainly open up their doors for you” (Mair, 1994, p. 1111).

So both receive a heaven-sent magic staff with powers tied to the recitation of a Buddhist deity’s name. The power of the Buddha’s staff is best exemplified by two passages:

He [Mulian] wiped his tears in mid-air, and shook the metal-ringed staff,
Ghosts and spirits were mowed down on the spot like stalks of hemp.
Streams of cold sweat crisscrossed their bodies, dampening them like rain,
Dazed and unconscious, they groaned in self-pity;
They let go of the three-cornered clubs which were in their hands,
They threw far away the six-tined pitchforks which were on their shoulders (Mair, 1994, p. 1112).

Incidentally, the power of the staff to unlock the gates of hell likely influenced the ability of Sun’s weapon from the Ming Journey to the West to magically pick locks. An example of this appears in chapter twenty-five:

The doors are all locked. Where are we going to go?” “Watch my power!” said Pilgrim. He seized his golden-hooped rod and exercised the lock-opening magic; he pointed the rod at the door and all the locks fell down with a loud pop as the several doors immediately sprung open. “What talent!” said Eight Rules, laughing. “Even if a little smith were to use a lock pick, he wouldn’t be able to do this so nimbly.” Pilgrim said, “This door is nothing! Even the South Heaven Gate would immediately fly open if I pointed this at it!” (Wu & Yu, 2012, pp. 468-469)

The bowl used by both the Monkey Pilgrim and Tripitaka is shown capable of extinguishing a great prairie fire and sucking up all the water of an ocean-like river (Wivell, 1994, pp. 1188 and 1190). Again, the basin is based on that carried by Mulian. But instead of receiving it from heaven, the saint first receives the bowl and a robe upon becoming a monk (refer back to the eighteen requirements of the monk mentioned above). After attaining supernatural power, he imbues the bowl with magic, allowing him to fly between the realms of heaven, earth, and the underworld. One example reads:

Maudgalyayana awoke from abstract meditation,
Then swiftly exercised his supernatural power;
His coming was quick as a thunderclap,
His going seemed like a gust of wind.
[…]
With his supernatural power, he gained freedom,
So he hurled up his begging bowl and leaped into space;
Thereupon, instantaneously,
He ascended to the heavenly palace of Brahma (Mair, 1994, pp. 1097-1098).

It’s interesting that both he and the primate hero meet a deity with the name Brahma.

The Monkey Pilgrim is also able to travel between earth and heaven but at a much slower pace. However, this could be related to him transporting himself and six human monks at the same time (Wivell, 1994, pp. 1183). As Sun explains in the Ming Journey to the West, mortal bodies are heavy and therefore hard to transport by cloud (Wu & Yu, 2012, p. 436). Having said that, the great speed of Mulian’s travel recalls Sun’s somersault cloud (jindouyun, 筋斗雲) (fig. 3), which the young immortal masters in chapter two of the novel:

[Master Subhuti said,] “Make the magic sign, recite the spell, clench your fist tightly, shake your body, and when you jump up, one somersault will carry you one hundred and eight thousand miles.” … Wukong practiced ardently and mastered the technique of cloud-somersault. From then on, he had complete freedom, blissfully enjoying his state of long life (Wu & Yu, 2012, p. 123).

I’d like to highlight that both passages mention Mulian and Sun Wukong gaining great freedom of travel. Monkey boasts about this skill several times throughout the novel. One example reads:

“You are fibbing again, Elder Brother!” said Eight Rules [Zhu Bajie]. “Six or seven thousand miles, how could you cover that distance so quickly?” “You have no idea,” said Pilgrim, “about the capacity of my cloud somersault, which with one leap can cover one hundred and eight thousand miles. For the six or seven thousand here, all I have to do is to nod my head and stretch my waist, and that’s a round trip already! … “My cloud-somersault is essentially like cloud-soaring,” said Pilgrim, “the only difference being that I can cover greater distances more rapidly” (Wu & Yu, 2012, p. 436).

Mi Wen-K’ai suggests that the somersault cloud is based on the Hindu monkey god Hanuman and his ability to leap great distances (Mair, 1989, pp. 712-713). While certainly plausible, I think the information above suggests Mulian’s bowl is another possible influence.

It is clear that the Monkey Pilgrim serves the part of Mulian in The Story. Each is cast as a mythic figure with magic powers who freely visits the realm above, where they meet a deity with the name Brahma. Most importantly, they use a golden-ringed monk’s staff and alms bowl in their respective quests. The staves are received from a Buddhist deity and the power of each weapon is tied to the recitation of that god’s name. Each staff has its own magical abilities. Mulian’s staff can mow down evil spirits and unlock the gates of hell, while the Monkey Pilgrim’s can shoot destructive rays of light and transform into living beings. Furthermore, their bowls are also magic. Mulian’s basin aids in his travel between heaven, earth, and the underworld. Monkey’s bowl can extinguish fires and suck up large bodies of water. Their use of these holy instruments is different but the end result is the same: salvation is bestowed. Mulian’s mother is released from her karmic torments and the Monkey Pilgrim’s protection allows Tripitaka to bring salvation-bestowing sutras back to China.

Mulian’s influence reaches beyond The Story to the Ming Journey to the West. The golden-ringed monk’s staff later influenced Sun Wukong’s As-You-Wish Gold-banded Cudgel. The power of the saint’s staff to unlock the gates of hell may have influenced the ability of Sun’s weapon to magically pick locks. Additionally, the great speed at which Mulian travels on his magic bowl may have influenced Sun’s somersault cloud.

While I believe Mulian’s bowl influenced the somersault cloud, Shao (2006) notes the  108,000 li (33,554 mi/54,000 km) covered by Monkey in a single leap is based on the symbolic distance said by Huineng to separate the Buddha’s paradise from the world of man. As the Chan patriarch explains in the Platform Sutra, “This number refers to the ten evils and eight wrongs in one’s person” (Huineng & Cleary, 1998, p. 26, for example). Only those who achieve enlightenment can overcome these hindrances and arrive instantly in paradise. This is symbolized in the novel by Monkey zipping their instantly on his cloud, whereas Tripitaka must travel thousands of miles over many years.

Mair, V. H. (1989). Suen Wu-kung = Hanumat? The Progress of a Scholarly Debate In Proceedings of the Second International Conference on Sinology (pp. 659-752). Taipei:

Wivell, C.S. (1994). The story of how the monk Tripitaka of the great country of T’ang brought back the Sūtras In V. Mair (Ed.), The Columbia anthology of traditional Chinese literature (pp. 1181-1207). New York: Columbia University Press.

2 thoughts on “Sun Wukong and the Buddhist Saint Mulian”