I. Battle of Transformations

Did you know that certain portions of Journey to the West were influenced by Indo-Persian and Arab Islamic lore? For instance, in chapter six Sun Wukong and Lord Erlang engage in a magical battle of skill in which they freely transform into myriad animals, each trying to one-up the other. This battle is unusual as Chinese stories going back to pre-Tang dynasty sources show characters could not transform at will. Conversely, One Thousand and One Arabian Nights (1704), which is based on stories as far back as the 9th-century, contains a tale featuring a magical battle of transformations between a princess and a genie. Literary critic C.T. Hsia (1996) notes that the similarities in magical combat “does not mean…the makers of the Monkey legend were specifically indebted to [the Arabian Nights], but it certainly indicates their general awareness of the popular literature of the Middle and Near East” (pp. 132-133).

Chapters 24 to 26 of Journey to the West feature a magical Ginseng Tree (人參樹, Renshen shu) that produces crying, baby-shaped ginseng fruits (人參果, renshen guo) capable of extending the lives of those who eat them to 47,000 years (fig. 1). The literary antecedent of this fruit first appears in The Story of How Tripitaka of the Great Tang Procures the Scriptures (Da Tang Sanzang qujing shihua, 大唐三藏取經詩話, “The Story” hereafter), a 17-chapter storytelling prompt dated to the late 13th-century. Chapter 11 features an immortal peach tree with fruits that transform into edible children once they drop into water. Each is capable of answering when asked a question:

Monkey Pilgrim continued: ‘There are more than ten peaches on the tree now, but there are gods of the earth who are posted here especially to protect them. There is no way to steal the peaches.’ The Master teased: ‘Your supernatural powers are stupendous. If you were to go, what could prevent you?’ Before his words were finished three peaches of immortality fell down into the pool. The Master was startled by the splash and he asked: ‘What fell down?’ Monkey Pilgrim replied: ‘Don’t be alarmed, Master. It was just a few ripe peaches of immortality which fell into the pool.’ The Master said: ‘Can we find them and eat them?’

Monkey Pilgrim took the golden-ringed staff and shook it three times in the direction of the huge, flat stone. A small child with a greenish face appeared. His fingernails were as sharp as a hawk’s claws and from his gaping mouth the teeth showed as he emerged from the pool. Pilgrim asked: ‘How old are you?’ The child answered: ‘Three thousand years.’ Pilgrim replied: ‘I have no use for you.’ Again he rapped five times and a child appeared whose face was as round as the full moon. He wore embroidered clothes and a headdress with tassels. Pilgrim asked: ‘How old are you?’ The child replied: ‘Five thousand years.’ Pilgrim replied: ‘I will not use you.’ And once more he rapped several times with the staff. Another child appeared all of a sudden. Monkey Pilgrim asked: ‘How old are you?’ ‘Seven thousand years,” the child replied. Monkey put down the golden-ringed staff and made the child get on his hand. Then he asked: ‘Monk! Will you eat this?’ The monks were terrified and fled. Pilgrim whirled his hand with the child in it a number of times and the child became a milky jujube which he popped into his mouth (Wivell, 1994, p. 1196).

The concept of speaking, human-shaped fruit can be traced to the “Waqwaq tree” from Islamic lore. For example, The Book of the Wonders of India (Kitaab Ajaaib al-Hind), a set of Indo-Persian sailor stories collected between 900 and 953, contains a brief anecdote which reads:

Muhammad b. Babishad told me that, according to what he had learnt from men who had been to the Waqwaq country, there is a large tree there, with round leaves, or sometimes oblong, which bears fruit like a marrow, only larger, and looking something like a human being. When the wind blows, a voice comes out of it. The inside is full of air, like the fruit of the usher. If one picks it, the air escapes at once, and it is nothing but skin (Buzurg & Freeman-Grenville, 1981, p. 39).

The 15th-century Arab historian Ibn al-Wardi took the concept further by describing the fruit as being shaped like voluptuous women (fig. 2) with the power of speech:

On this island are trees that bear as fruit women: shapely, with bodies, eyes, hands, feet, hair, breasts, and vulvas like the vulvas of women. Their faces are exceptionally beautiful and they hang by their hair. They come out of cases like big swords, and when they feel the wind and sun, they shout “Waq Waq” until their hair tears (Toorawa, 2000, p. 393).

Various sources respectively locate the Waqwaq tree and its home of Waqwaq, a faraway, exotic land or island, somewhere within the Indian Ocean, beyond Iraq, or, further still, beyond China. The Waqwaq term was most likely used to describe the limits of the known world at given times (Toorawa, 2000). The tree itself can possibly be traced to a passage in the Quran (Sura 37, verses 60-64) that describes how the “Tree of Zakkum” produces fruit shaped like the heads of demons. The earliest mention of the Waqwaq tree in Chinese sources appears in the late 8th-century Comprehensive Encyclopedia (通典, Tongdian) by the travel writer Du Huan (杜環). This is apparently based on an earlier Arabic source (A floral fantasy, n.d.).

I was looking through the Ming-era Illustrated Encyclopedia of the Three Realms (三才圖會, Sancai tuhui, 1609, “Three Realms” hereafter) and happened upon a woodblock print of a Waqwaq tree (fig. 3). The image is labeled Dashi Guo (大食國), A term used since the Tang Dynasty to refer to an ancient country in the Arab World (Zhang & Unschuld, 2015, p. 81). This shows the Chinese were still aware of the tree’s foreign origin around the time that Journey to the West was published.

As noted above, Hsia (1996) suggests the battle of transformations between Monkey and Erlang was influenced in some way by Islamic literature. However, Robinet (1979) describes a tit-for-tat battle from Daoist literature that casts doubt on this view:

The Xianyuan bianzhu [仙苑編珠, “Paired Pearls from the Garden of Immortals”, after c. 921] tells how Wang Tan [王探] received “the art of hiding his light and transforming his body.” Dared by someone to metamorphose himself, he took the form of a tree, but the other fellow seized an axe. Wang immediately transformed himself into a stone, but the other lit a fire (in the theory of the five elements, fire prevails over minerals). After turning himself into bubbling water and so on, Wang Tan finally achieved the upper hand by adopting the appearance of a corpse-the man fled immediately (p. 46). [1]

The way the Daoist and his opponent try to one up the other is very similar to the battle between the Great and Small Sages. Therefore, it’s not a stretch to suggest this story (or related media) was embellished by a storyteller or the author-compiler of the Ming Journey to the West to include two masters of transformation instead of one.

Thanks to a recent Twitter post by Guy Reisman, I was delighted to learn that the Islamic Waqwaq tree made its way to Japan, where it is known as the Jinmenju (人面樹, “human-face tree“). In fact, an illustration of the tree appearing in the Edo-period bestiary Konjaku Hyakki Shūi (今昔百鬼拾遺, “Supplement to The Hundred Demons from the Present and the Past”, c. 1781) appears to be based on that from the Three Realms cited above (refer back to fig. 3).

Even more exciting, however, is the revelation of the identity of the man standing beneath the tree in the Three Realms illustration. Foster (2015) traces the Japanese image to the Three Realms and then further back to a Persian source, thereby associating the man with a famous historical king:

If we continue back in time and along the Silk Road, we find different versions of the great Persian epic poem Shahnama (Book of Kings) by Firdawsi (d. 1020), with illustrations of a man conversing with a tree bearing human heads. The man, it turns out, is Alexander the Great (Sikandar or Iskandar), and the illustrations portray his legendary encounter with a talking tree, sometimes called the Wakwak Tree, that prophesied his death (p. 185).

That’s right, the man in the Three Realms is based on Alexander the Great! See image four for a comparison of the Chinese illustration and one example of Persian “Iskander and the Talking Tree”-genre drawings. Both men stand in a similar position, looking upwards. The Persian Alexander is passively listening, while the Three Realms Alexander is actively talking.

Fig. 4 – A comparison of a 15th-century Persian “Iskander and the Talking Tree” image and the Three Realms image (larger version). The former is held by the Bodleian Library.

This then raises the question: Did material related to the Shahmana influence the Ginseng Tree in Journey to the the West? [2] I’ve already demonstrated that an antecedent of the Ginseng tree appears in The Story. But this doesn’t necessarily negate some sort of influence. After all, both the Shahmana and Journey to the West feature mythic kings (Alexander and Sun Wukong) coming into contact with magic trees with humanoid fruit. I should note, however, that the trees represent two drastically different fates. Alexander’s tree foresees his death, while Monkey’s tree holds the promise of eternal life. Further research might shed light on stronger connections between both stories.

I was scrolling through Twitter, when I came across a post displaying a lovely 19th-century engraving of a magical tree from “The Goblin and the Grocer” (Danish: Nissen hos Spekhøkeren, 1852), a fairy tale by Hans Christian Andersen. The tree is shown to have smiling, female head-shaped fruits similar to the waqwaq tree (fig. 5). The description of the tree reads:

Out of the book shot a streak of light which grew into a large tree and spread its branches far above the student. Every leaf was alive, and every flower was a beautiful girl’s head, some with dark and shining eyes, others with wonderful blue ones. Every fruit was a glittering star” (Anderson, 1904, pp. 13-14)

So it appears that the waqwaq tree came to influence European literature as well. 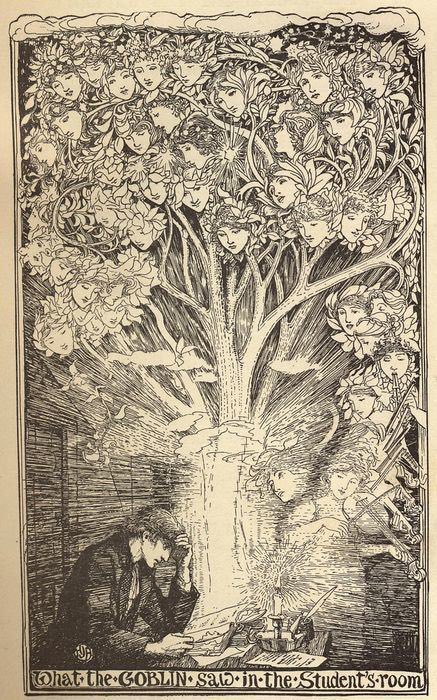 I’ve archived a paper showing that magical battles of transformation can be traced to Ancient Near Eastern, Egyptian, and Greek stories.

1) I changed the Wade-Giles to Pinyin.

2) Hall (2019) explains Iskander’s meeting with the talking tree takes place in both the Shahmana and the older Greek Alexander Romance (p. 149).

A floral fantasy of animals and birds (Waq-waq). (n.d.). Cleveland Museum of Art. Cleveland, Ohio. Retrieved May 12, 2017, from http://library.clevelandart.org/site…0Waq%20waq.pdf

Wivell, C.S. (1994). The story of how the monk Tripitaka of the great country of T’ang brought back the Sūtras In V. Mair (Ed.), The Columbia anthology of traditional Chinese literature (pp. 1181-1207). New York: Columbia University Press.