Not many people know that there are three main editions of Journey to the West from the Ming Dynasty. The best known is the standard 1592 edition, Newly Printed, Illustrated, Deluxe and Large Character, Journey to the West (Xin ke chu xiang guan ban da zi Xiyou ji, 新刻出像官板大字西遊記) in 20 rolls and 100 chapters (99 in its original form). The second is the “Zhu edition”, Newly printed, Completely Illustrated, Chronicle of Deliverances in Sanzang of the Tang’s Journey to the West (Xin qie quan xiang Tang Sanzang Xiyou shi ni (e) zhuan, 新鍥全像唐三藏西遊释尼(厄)傳) in ten rolls (with three to ten chapters each) by Zhu Dingchen (朱鼎臣) of Yangcheng (羊城, i.e. Guangzhou). The third is the “Yang edition”, Newly Printed, Complete Biography of Sanzang’s Career (Xin qie Sanzang chu shen quan zhuan, 新鍥三藏出身全傳) in four rolls and 40 chapters by Yang Zhihe (陽至和) of Qiyun (齊雲).

Koss (1981) performs an in-depth analysis of all three editions, showing that the 1592 edition is an expansion of Zhu and Yang is a later abridgement of the former. Zhu being the oldest, with portions likely predating 1450, is based on its earlier style phrasing and chapter structure; the use of vernacular language with simplistic two-person dialogue and fewer and less literary poems, suggesting a reliance on oral literature; and Zhu illustrations serving as the basis for many pictures from the 1592 edition. This two volume tome is a fascinating, though extremely technical, read for anyone interested in the development of Journey to the West.

An image from the Zhu edition (larger version).

This has been posted for educational purposes. No malicious copyright infringement is intended. Please support the official release.

The twenty-seventh chapter of Journey to the West (Xiyouji, 西遊記, 1592) features a mountain spirit who resorts to magic disguises in an attempt to eat Tripitaka. Commonly referred to as the “White Bone Spirit” (Baigujing, 白骨精), she is one of a family of ghouls active in White Tiger Mountain (Baihu ling, 白虎嶺) who have long told legends of the monk’s immortality-bestowing flesh. She resorts to subterfuge because alone she is not powerful enough to contend with the holy man’s present disciples, Zhu Bajie and Sha Wujing.

The spirit first disguises herself as a peerless beauty described as having “ice-white skin hid[ing] jade-like bones” (Wu & Yu, 2012, pp. 18). She comes bearing a vegetarian meal, claiming it to be food intended for her pious husband toiling in the fields on the other side of the mountain. She instead decides to feed Tripitaka as this would allow her to keep her family’s vow of supporting monks. But before she can kidnap the monk, Sun Wukong returns from picking peaches for his master and sees through the magic facade, seemingly killing the young girl with his magic staff. The monster, however, is able to escape in spirit at the last second using the “Magic of Releasing the Corpse” (Jieshi fa, 解屍法), [1] leaving behind a fake body in her place. The innocent-looking food is then revealed to be bewitched frogs, toads, and maggots. Despite this, Zhu Bajie convinces their master that Monkey is trying to conceal the murder with magic, leading to the monk using the Tight-Fillet spell as punishment.

She subsequently disguises herself as the girl’s elderly mother searching the mountain for her daughter. Sun again sees through the disguise and seemingly kills her with his staff. This again leads to his punishment with the Tight-Fillet spell. The White Bone Spirit’s last disguise is that of the elderly father looking for his wife and daughter. But this time Monkey calls on local deities to guard any possible escape routes, and this time he succeeds in killing her. The spirit’s true form is revealed to be a “pile of flour-white skeletal bones” with the name “Lady White Bone” (Baigu furen, 白骨夫人) engraved on her spine (fig. 1) (Wu & Yu, 2012, pp. 26). 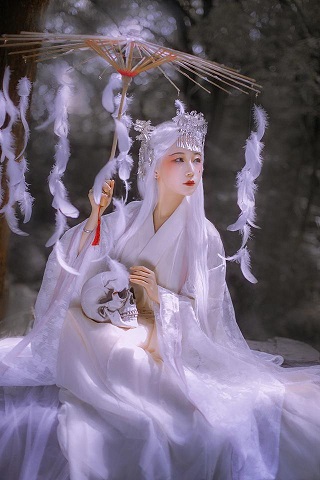 The precursor of the White Bone Spirit can be traced to a demon appearing in chapter six of The Story of How Tripitaka of the Great Tang Procures the Scriptures (Da Tang Sanzang qujing shihua, 大唐三藏取經詩話, c. late 13th-century), the earliest known printed edition of Journey to the West, which likely served as a prompt for ancient storytellers.

The pilgrims arrived at the valley of the fire-spitting White Tiger Spirit (Huo lei ao baohu jing, 火類坳白虎精). Coming closer they encountered a great ditch. The four steep entrances were pitch-black and they heard a roar of thunder. They could not advance. The Dharma Master [Fashi, 法師, i.e. Tripitaka] held up his [magic] golden-ringed staff and, flourishing it toward the distant heavenly palace, yelled: “Devaraja! Help us in our afflictions!” Suddenly a shaft of light shot out from the staff five tricents long. It slashed through the long ditch and soon they were able to get across.

Next they came to Great Serpent Peak. There they saw a gigantic serpent like a dragon. It likewise was not harmful to humans. Then they crossed the pit of the fire-spitters. Down, down into the fiery pit they looked and saw a pile of dry bones over forty tricents long. The Dharma Master asked Monkey Pilgrim [Hou xingzhe, 猴行者]: “What are those white withered bones piled up there like snow on a mountain?” Monkey Pilgrim replied: “This is the place where the Heir Apparent, Ming Huang…changed his bones.” [2] The Dharma Master, hearing this, joined his palms and bowed his head in reverence.

Next they suddenly came to a prairie fire which reached to the heavens. It sent off such a huge amount of smoke and sparks that the pilgrims could not proceed. The Dharma Master shone the light of his [magic] begging-bowl toward the fire and yelled: “Devaraja!” The fire died out immediately and the seven pilgrims crossed this pit. When they were halfway across, Monkey Pilgrim said: “Master, did you know this peak is inhabited by a white tiger spirit? It often appears as a vixen, demon, or goblin and even eats people.” The Master replied: “I didn’t know!” After a while they could see a spume of ominous-looking smoke rising behind the peak and from the cloud thus…fell a mixture of rain, snow, and sleet. In the cloudy mist there was a woman dressed all in white.

She wore a white bodice of gauze, a white gauze skirt with a white belt, and held in her hands a single white peony. [3] Her face was as pretty as a white lotus, her ten fingers like precious jades. Observing the form of the ogress, Monkey Pilgrim had his suspicions confirmed. “Master, don’t go any farther,” said Monkey Pilgrim. “It’s surely an ogress. Wait till I go up and ask who she is.” Monkey Pilgrim took one look at her and shouted in a loud voice: “What place are you from, demon? What shape is beneath your facade? If you are a sprite or goblin, why don’t you hurry back to your lair? If you are an ogress, hurriedly hid your traces. But, if you are the daughter of a human being, then tell me your name and surname. And be quick about it! If you procrastinate and don’t speak, I shall reduce you to dust and power!” Hearing the pilgrim’s ferocious tone of voice, the white-clad woman slowly advanced, smiled coyly, and inquired whither the master and his disciples were going. Monkey Pilgrim said: “Ask no more! We travel for the sake of the sentient beings of the Eastern Lands. And you must be none other than the White Tiger Spirit of the Fire-spitting Pit.”

Hearing this, the woman’s mouth gaped open and she screamed loudly, while at the same moment her skin burst open revealing claws, long fangs, a tail, and a feline head. She was fifteen feet long. In another instant the whole mountain was filled with white tigers. Monkey Pilgrim transformed his golden-ringed staff into a gigantic Yaksa whose head touched the sky and whose feet straddled the earth. In his hands he grasped a demon-subduing cudgel. His body was blue as indigo, his hair red as cinnabar; from his mouth a fiery gleam shot forth a hundred yards long. At the same time, the White Tiger Spirit advanced with a roar to do battle, but she was repulsed by the Monkey Pilgrim. After a short while, Monkey Pilgrim asked if the tiger spirit was ready to submit. She replied, “Never!” Monkey said: “If you will not submit, you will find an old monkey in your stomach!”

The tiger spirit heard what he said yet did not surrender right away. But no sooner had he yelled “Monkey!” than a monkey in the White Tiger Spirit’s stomach responded. The tiger spirit was forced to open her mouth and spit out the monkey. When it landed on the ground in front of her, it became twelve feet long with flashing eyes. The White Tiger Spirit spoke: “I still will not submit!” Monkey replied: “Then you will find another in your stomach!” Again, he caused the tiger spirit to open her mouth and spit out another monkey which landed in front of her. And again the tiger spirit said: “I still do not submit!” Monkey replied: “There are countless old monkeys in your stomach now, and even if you spit them out all day today until the next, all this month until the next, all this year until the next, all this life until the next, you will not be rid of them!” This made the tiger spirit angry. She was again afflicted by the Monkey when he transformed himself into a great stone in her stomach which gradually grew in size. Though she tried to spit it out, she couldn’t. Her stomach split asunder and blood poured from her seven orifices. [4] Monkey called upon the yaksa to slaughter the big White Tiger Spirit ruthlessly, and the yaksa pulverized its bones and obliterated its last vestiges.

The [Monkey Pilgrim], having withdrawn [his] magic, rested for a time before [the group] continued the journey. They left a poem:

The pit of fire-spitters and the White Tiger Spirit,
All that lot are vanquished, and peace and safety reign.
Now, the supernatural power of Monkey Pilgrim is displayed,
Protecting the monkish pilgrims across the great ditch (Wivell, 1994).

The chapter has a number of details that naturally led to the development of the White Bone Spirit.

1) This is related to an ancient Daoist concept called “Release by means of a corpse” (Shijie, 尸解). As far back as the Han, immortals are described as leaving a fake corpse (sometimes a magically disguised object) behind while they ascended in secret to heaven (Kirkland, 2008).

2) This changing of bones most likely refers to some type of realized spiritual cultivation that resulted in a new, pure body for the future emperor.

3) The color white is associated with death in Chinese culture.

4) Sun Wukong defeats several monsters in Journey to the West by invading their stomach. See, for example, chapters 59, 75, and 82.

Wivell, C.S. (1994). The story of how the monk Tripitaka of the great country of T’ang brought back the Sūtras. In Mair, Victor H. The Columbia anthology of traditional Chinese literature (pp 1181-1207). New York: Columbia University Press.